Friendlies or not, these blown leads and miserable second halves have grown pretty old.

First half goals from Brek Shea and Jozy Altidore had the United States men’s national team up 2-1 at the break, with Roberto Gutierrez scoring Chile’s goal in the 10th minute. Two second-half finishes from Mark Gonzalez earned Chile a 3-2 win.

A trio of U.S. players made their international bows, with Steve Birnbaum (DC United) starting in the back while Gyasi Zardes (L.A. Galaxy) and Wil Trapp (Columbus Crew) coming off the bench.

And the Yanks were again victimized by poor organization after substitutions. It’s fair to note that the six substitutions of a friendly are a bigger hiccup than the three in a formal competition, but the U.S. has been outscored 9-0 in its last five second halves.

Some have speculated that Jurgen Klinsmann wouldn’t have lined his men up in a 3-5-2 had DeAndre Yedlin not been allowed to go to Chile, and the speedy youngster gave the States plenty of thrills on Wednesday night while also showing his marking and finishing remain quite raw.

Shea was on the business end of a through ball from Matt Besler, and the Orlando City man ripped a left-footer past Johnny Herrera to open the scoring in the sixth minute (Watch the goal here).

And while Gutierrez victimized Jones and Besler to tie it at 1 four minutes later, the States attack did a number on Chile’s back line on the go-ahead goal (Watch the goal here). DeAndre Yedlin won a throw-in after a pacy right-wing run before finding Mix Diskerud, who laid off for Altidore in a spot the big man rarely misses from (at least in a U.S. jersey).

Lee Nguyen entered the game at halftime for the Yanks, moving Clint Dempsey up to forward as an ineffective Bobby Wood subbed off.

Nick Rimando had his share of scares, but there’s no doubt the Real Salt Lake man made a pair of huge saves in the match’s first hour. Most impressive was his bailing out Jones after some Diego Valdes thievery near the U.S. 18.

Michael Bradley put a screamer off the cross bar in the 61st minute. Moments later, Rimando bailed Steve Birnbaum out of a potential own goal, though it’s unfair to mention Birnbaum’s name for the first time now. The DC United defender played well in his first cap.

As the States made subs, Chile began to find its home form. At times, the excuse that the Yanks are mostly out of season and Chile are 4-5 games into theirs seemed decent.

And then came the equalizer on a stunner from Mark Gonzalez, who absolutely fooled Nick Rimando and lifted a shot over the goalkeeper’s right arm. 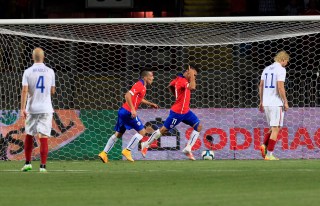 Gonzalez added a second less than 10 minutes later, finding a rebound and pounding a shot that took a turn off Birnbaum and into the net.

Substitute Chris Wondolowski nearly headed a neat cross from Michael Bradley home, but Herrera made a nice save on the San Jose striker.

Shea could’ve seen red for a high challenge late in the match, but was only shown yellow.

Zardes had a good chance in stoppage time, but his low shot was parried away by Herrera, who had a strong match.

The States next game is in California on Feb. 8 against Panama.