Both teams were missing key players, but Manchester City will feel it wasted a prime chance to close the gap on a shorthanded and first-place Chelsea side in Saturday’s 1-1 draw at Stamford Bridge.

[ RELATED: Three things we learned | Player ratings out of 10 ]

Chelsea’s lead atop the Premier League remains five points over second-place Manchester City. Manchester United are five points back of City thanks to a 3-1 win over Leicester earlier Saturday.

Both scores came before half, with Loic Remy and David Silva slotting home. 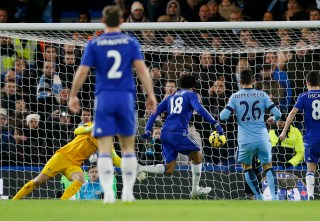 A tentative start from both teams was perhaps what you’d expect from a huge match between the top two teams on the table. The presence of Ramires and Nemanja Matic atop the Chelsea back line showed that Jose Mourinho didn’t want to take chances against Sergio Aguero, Silva and company.

But Chelsea got on the score sheet first on a gorgeous bit of combination play. After Willian physically won a battle on the right side, Branislav Ivanovic sent a diagonal ball over the City defense. Hazard got on the end to send it across the six with his right boot, and Remy darted through the line to pass the ball home in the 41st minute.

City took less than five minutes to answer, with Aguero teeing up an effort from the left that might’ve found the net on merit. A sliding Silva made sure of it, and we were level before half.

The second half began with the Stamford Bridge crowd at full throat, but it was Man City who came aggressively for the hosts. Courtois was forced into a touch over the bar off a tricky header from Fernandinho, and then a Ramires foul gave City a great free kick opportunity.

The first substitution didn’t come until there were less than 15 minutes to play, and it was a doozy: Blues legend Frank Lampard entered the fray for Manchester City.

Chelsea added Gary Cahill into the fray in the 87th minute to further shore up the back, and despite nervy moments the club held on for all three points. Kurt Zouma was one of the better players on the night for Chelsea, looking far wiser than his 20 years.

City picked up its eighth corner kick with moments to spare, but a short corner provided nothing. Chelsea held its table lead.