No Cristiano Ronaldo, no problem for Real Madrid as Carlo Ancelotti’s side made handy work of Real Sociedad at the Santiago Bernabeu on Saturday. Without Ronaldo, who was serving the first of his two-game suspension for striking Edimar in the face last weekend, the likes of James Rodriguez (3rd minute), Sergio Ramos (37th) and Karim Benzema (52nd and 76th) filled Madrid’s non-existent goalscoring void.

Benzema’s second was the pick of the litter, as the French striker whipped a vicious curler into the top corner from the opposite corner of the 18-yard-box to notch his 11th La Liga goal of the season (17 in all competitions). Madrid actually trailed in this game, following Aritz Elustondo’s 1st-minute goal for Sociedad.

Antoine Griezmann’s stellar first season for Atletico Madrid continued on Saturday as the 23-year-old French attacker bagged his 11th league goal of the season (14 in all competitions) in the 7th minute. Mario Mandzukic, another of Atletico’s summer signings, notched his ninth and 10th league goals (18 in all competitions) as Diego Simeone’s side (47 points) cruised to their third-straight league victory and remain in the title race behind Real Madrid (51, one fewer game played) and Barcelona (47, one fewer game played). 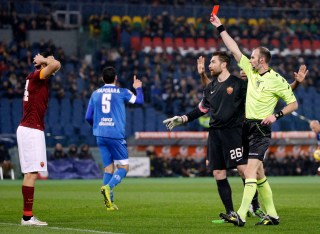 Rudi Garcia’s Roma (one win in their last six Serie A games) are in serious trouble after another draw on Saturday surely all but deadened any faint title hopes they may have still harbored.

Greek defender Kostas Manolas (right) got himself sent off in the 37th minute and gave away a penalty kick in the process, putting Roma down early. Empoli midfielder Riccardo Saponara picked up two yards cards in three minutes at the end of the first half, though, leaving both sides with 10 men for the entire second half.

A left-footed curler by Maicon equalized in the 57th minute, but Roma failed to find the all-important second goal despite out-possessing (56 to 44) and out-shooting Empoli (20 to 7, 3 to 1 on target). With their fourth-straight league draw, Roma (43 points) find themselves six points adrift of Juventus, who are away to Udinese on Sunday.

Fiorentina were the only Serie A side not to see one of their players sent off on Saturday, but were forced to settle for a single away point, despite both goals in their 1-1 draw with Genoa being scored by Fiorentina players.

Fiorentina goalkeeper Ciprian Tatarusanu never saw Stefano Sturaro’s shot bounce of the post before the ball hit him in the side of the head and bounced into his own goal. Gonzalo Rodríguez equalized for Fiorentina in the 54th minute, but a game-winning goal wasn’t to be.