All the headlines will be about Daniel Sturridge’s brilliant return to the pitch in Liverpool’s 2-0 win on Saturday, but Philippe Coutinho’s service was the stuff of genius on both Reds’ goals.

The Brazilian provided the assists, and both Sturridge and Raheem Sterling netted as Liverpool held possession and now has all three points in a comfortable win over the visiting Hammers.

Liverpool leapfrogs its opponents on the table, moving into 7th with 38 points.

The Reds should’ve been up just before halftime, as Raheem Sterling was nearly NFL-tackled inside the box, but he went down softly on the follow-up foul. Regardless, the ball came to Lazar Markovic near the penalty spot but he curled the ball just wide of the goal. 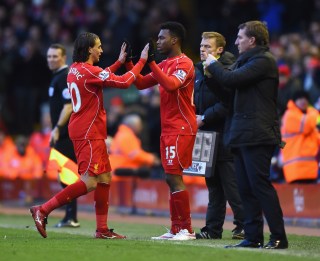 But Liverpool found the back of the net off a congested play just outside the West Ham 18. Coutinho first-touched side-footed pass in to Sterling, and Adrian looked baffled, allowing the Liverpool star to finish with class and make it 1-0.

And Sturridge lifted the Anfield crowd into ecstasy by scoring on his return to the lineup after five months, burying a slick through ball from Coutinho. He made no doubt of it, and certainly the Anfield set will again be daydreaming about the Top Four with their leading striker back in the frame (literally and figuratively).