Three top-half clubs are hoping to keep their ambitions realistic with wins on Sunday morning, while the Premier League’s fifth-worst side hopes to find some relegation relief by posting a giant upset at the Emirates Stadium.

Of those that played, every team ahead of the Gunners picked up points on Saturday, and Arsenal can’t afford to overlook struggling Aston Villa on Sunday.

The Villans are just three points clear of the drop zone, but hope that new midfielder Scott Sinclair can inject some life into their attack. Villa has three points, all draws, from its last six matches. They’re also losers of three-straight Premier League matches.

A loss keeps Arsenal in sixth, and the Gunners enter the day a point behind Tottenham for fifth and three points behind the fourth-place Saints. 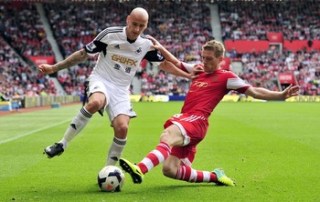 Winners of three-straight, the Saints are the joint-hottest teams in the Premier League (Liverpool), while Garry Monk’s Swans are trying to come to grips with life after Wilfried Bony.

Swans have gone four without a win in the Premier League, but what a tough road they’ve had to travel! Losses to Chelsea and Liverpool bookend draws at QPR and home to West Ham United.

Southampton will want a win to regain its two-point edge on Manchester United, and pull to within three points of second-place Manchester City.