AC Milan and the San Siro have been synonymous for almost 90 years, but on Wednesday Milan revealed stunning plans for a brand new $365 million stadium.

The stunning proposals, which include a retractable roof and are described as being “inspired by the Emirates Stadium,” have been submitted and a final decision is expected in March as to whether or not the Rossoneri will get planning permission to go ahead with the big move.

If they get the thumbs up AC will relocate to the Portello-Fiera area of Milan, as the stadium will be built next to the new club headquarters which were just built. Their current San Siro home holds over 80,000 but this season AC’s average attendance is 45,978 which is the highest in Serie A but still the San Siro is half empty for most matches.

This proposed move to a smaller stadium follows on from Juventus moving from the Stadio delle Alpi (67,000) to their new Juventus stadium (40,000) in 2011 as attendance figured across Italy’s top-flight continue to underwhelm. The big question is whether or not Inter Milan will now have the San Siro all to themselves, after previously sharing it with AC, or also move into a new stadium in another area of the city. Time will tell.

Below are some photos of the proposed stadium which could be the new home of AC for the start of the 2018-19 season. 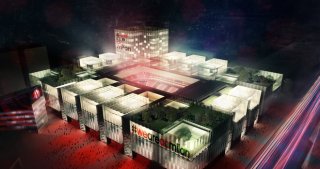 Here are the first pics of the “New AC Milan Stadium” in the Portello-Fiera Milano City area, Pavilions 1 and 2 ©ARUP pic.twitter.com/MmTheEYbx4