It had been five meetings (all competitions) since Real Madrid last beat Atletico Madrid (last season’s Champions League final), so it should come as little surprise that Atletico extended that streak to six games on Saturday. The part that shocked the world about their latest Madrid derby triumph, though, was the ease with with Diego Simeone’s men dominated Madrid’s “top” club.

Despite holding 55 percent of possession, Real took just four shots on the afternoon (one on target), to Atletico’s 17 and eight. Cristiano Ronaldo even returned from his two-game suspension, joining Karim Benzema and Gareth Bale across the Real frontline. It simply did not matter.

Iker Casillas’ latest blunder cost Real the game’s first goal as Tiago’s tame effort squirted under the beleaguered goalkeeper in the 14th minute. Atletico wasted little time in going after a second goal, doubling their lead on a spectacular overhead kick by Saul Niguez (see below link for video) in the 18th minute. Antoine Griezmann (12th La Liga goal) and Mario Mandzukic (11th) completed scoring in the second half to secure yet another famous Madrid derby victory for Los Rojiblancos.

With their first defeat in six league games, Real stay on 54 points, four ahead of Barcelona (50), who play on Sunday, and Atletico (50).

[ WATCH: Saul Niguez with the spectacular overhead kick for 2-0 ]

Goals by Mateo Musacchio (30th minute) and Gerard Moreno (92nd) were enough to give El Submarino Amarillo (The Yellow Submarine) all three points.

Levante’s (19 points) fight to avoid relegation took a massive step forward on Saturday as Les Granotes brushed seventh-placed Malaga aside. Levante, who were 20th out of 20 teams at kickoff, vaulted all the way over the other two relegation places and into 17th at the end of day.

David Barral scored his second, third and fourth league goals (26th minute, 37th, 62nd) of the season, including two from the penalty spot, after Malaga’s Juanmi put the visitors ahead after 24 minutes. Kalu Uche completed the scoring on 75 minutes, dropping Cordoba, who play on Sunday, into 18th place. 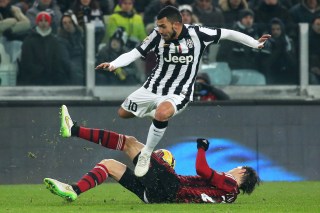 Carlos Tevez got the three-time defending champions off to a quick start with a slotted finish (14th league goal) past Diego Lopez in the 14th minute. Milan hit back with an equalizer as Luca Antonelli headed home a corner kick in the 28th minute.

The 1-1 scoreline didn’t last for long, though, as Leonardo Bonucci redirected a poorly cleared corner kick past Lopez in the 31st minute. Spanish forward Alvaro Morata finished the scoring when he knocked home a rebound off the past.

Elsewere in Serie A