Danny Ings played provider and finisher to a pair of first-half header goals, but Burnley coughed up a two-goal lead to Brown Ideye and West Bromwich Albion in a 2-2 draw on NBCSN to start off a Sunday morning Premier League tripleheader.

The Clarets were denied a pair of deserved penalties in the final half-hour of the match, as Mike Dean was unmoved by a takedown and a handball.

West Brom moves three points clear of the drop, while Burnley does manage to slide out of the relegation zone. The Clarets are a point ahead of Hull City.

Burnley opened the match with nearly two minutes of uninterrupted possession, capped by Ings left-footed shot from distance. It curled just over the bar, and the Clarets quickly got the ball back to begin another attack.

Ben Foster tipped a Scott Arfield shot off the bar in the 8th minute after Kieran Trippier found him with a slick cross from the right of the 18.

The seemingly inevitable goal came two minutes later, as Ings chested a cross down for his left peg to pop a ball square over three West Brom defenders, and Barnes headed past a diving Foster.

Burnley weren’t done, doubling its lead in the 32nd minute off a clever bit of soccer. Trippier dummied a pass that George Boyd collected while racing down the right side of the pitch. His cross met Ings head, and the score was 2-0. 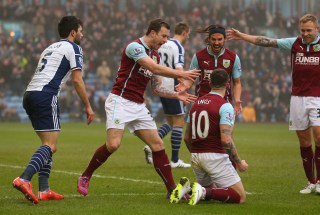 But it wouldn’t be an hour of academic play, as Chris Brunt’s stoppage time header gave the Baggies some life off a corner kick.

The second half began with plenty of hard fouls and physical play, and the Clarets were denied a 61st minute penalty appeal that could’ve made it 3-1. Kieran Trippier sent in an inviting cross, and Barnes was shoved down by Craig Dawson as he rose to head it. No call.

Ideye was given a yellow for furiously protesting a handball call (and seemingly rightly so). But he received his just desserts moments later, heading in a Chris Brunt corner to even the score at 2 in the 67th minute.

There were several close calls in the final 20 minutes for both sides, including a big clear off the line from Joleon Lescott, who had a strong match at both ends of the pitch for the Baggies.

And then a clear handball inside the box from Gareth McAuley went unwhistled, and Dyche was sure to feel aggrieved by another uncalled foul in the 18.

Darren Fletcher served as captain for the Baggies in his first match since coming over from Manchester United on Deadline Day.