The United States women’s national team now has just one win in its last five matches after falling to France on Sunday.

The No. 3 ranked French side got a 51st minute goal from Eugenie Le Sommer (right) and another moments later from Jessica Houara (below, center) to down the No. 2 ranked States.

How long those numbers remain is uncertain. The USWNT has a chance to right the ship on Friday in Milton Keynes against No. 6 England.

The French could’ve broken through earlier if not for U.S. keeper Ashlyn Harris, who made some splendid first-half saves.

Abby Wambach subbed on late, and won a penalty only to see it saved by French keeper Sarah Bouhaddi. 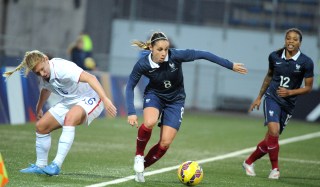 Germany overtook the States in the FIFA rankings this December, knocking the U.S. out of the top spot for the first time since 2008.

Sunday’s result will set off some — or further —  trepidation amongst U.S. supporters. The USWNT is in a tricky World Cup Group D with Australia, Sweden and Nigeria.

Here’s how they started: