The U.S. national team snapped its frustrating five-game winless streak with a 2-0 victory over Panama at StubHub Center on Sunday, giving Jurgen Klinsmann’s USMNT just its second victory since the 2014 World Cup.

The stars of the show turned out to be two players who’ve not participated in many January camps and friendlies in recent years as USMNT regulars Michael Bradley and Clint Dempsey only returned to Major League Soccer within the last 18 months. Their respective club situations aside, it’s a very welcome sight to see, the USMNT’s two biggest stars kicking off an hugely important 2015 with strong performances.

The first chance of the game fell the way of Panama in the 14th minute, as Eric Davis got behind the USMNT backline and squared himself up with Nick Rimando, but the American goalkeeper made himself big and made the save.

[ PLAYER RATINGS: Bradley, Dempsey star vs. Panama, but who else improved their stock? ]

The USMNT enjoyed a fruitful spell of possession in Panama’s defensive third right around the 20-minute mark as Jozy Altidore won a free kick on the edge of the penalty area, Gyasi Zardes provided a pair of quality crosses into the middle of the box from the left and Michael Bradley’s in-swinging corner kick cause Panamanian goalkeeper Jaime Penedo all sorts of trouble at the near post.

Panama nearly broke that spell with a great chance of their own as Blas Perez got onto the end of a through ball 10 yards from goal, but Brek Shea was quick to dive in and block Perez’s shot.

Michael Bradley put the USMNT on top with an olimpico in the 27th minute. Delivering a corner kick from the left side of attack, Bradley’s superb set piece delivery continued as his shot floated and floated toward the back post, eluding the heads of defenders and attackers a like, forcing Penedo to backpedal and backpedal, and nestling itself into the upper-90 for the game’s opening goal.

Clint Dempsey, perhaps with only his second or third touch of the game, double the USMNT’s lead in the 37th minute. Gyasi Zardes made a surging run through the heart of midfield, slipped a perfectly weighted through ball to Dempsey as he split the Panamanian backline. Dempsey’s first and second touches were a tricky piece of footwork to skirt one defender and the goalkeeper, and roll the ball over the goal line. 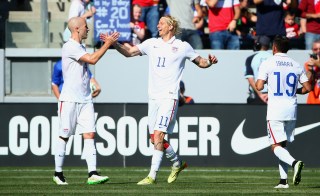 Perez had a golden opportunity to pull one back for Panama in the 41st minute as he suddenly found himself one-on-one against Rimando after a slip by Matt Besler, but Perez smashed his shot well wide of the near post.

As the game opened up a bit, the USMNT counter-attack came to the forefront as Bradley nearly bagged a brace in the 43rd minute. Atidore made a driving run with the ball down the left wing, crossed to Zardes at the top of the penalty area. Zardes chested the ball down, into the path of the late-arriving Bradley who took a powerful shot on the half-volley from 20 yards out. The shot stayed low and Penedo did well to trap and hold the blistering shot.

The game’s second half provided a pace familiar to that of the first half, but was seriously lacking in terms of quality, connection of passes and chances created.

The USMNT now takes a break until March 25 (Denmark) and March 31 (Switzerland) as players return to — in many cases — their MLS clubs for preseason and the start of the 2015 season. The 2015 Gold Cup is 109 days away.