While ably filling in at center back, Cheikhou Kouyate found the time and space to push West Ham United atop visiting Manchester United at the Boleyn Ground on Sunday, only to watch Daley Blind undo it with a stoppage time equalizer.

Kouyate scored a brilliant goal in the 49th minute, and his Irons nearly kept the Red Devils off the scoreboard in a 1-1 draw. But there was Blind to draw things level in the second minute of stoppage time.

The draw leaves Manchester United in fourth place, one point back of Southampton, while West Ham remain in 8th. The Irons are two points back of Liverpool.

The most lively part of the first 12 minutes or so was the singing of West Ham’s supporters, but the Hammers starting to put pressure on David De Gea.

First, Enner Valencia forced the Spanish keeper into a save, and then his header off the ensuing corner called De Gea into action again.

Through it all, West Ham enjoyed the lion’s share of possession. Manchester United’s set-up was begging for Juan Mata, or someone who could possess and create. 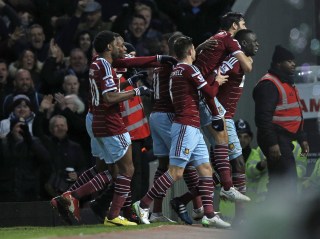 Playing center back, Kouyate made the difference on the attack. He collected a cross with his back to goal, juggled it twice to turn before lashing the ball past De Gea to make it 1-0 (WATCH HERE).

Carl Jenkinson’s misplaced cross nearly turned into a chipped goal, but the 64th minute ball sunk wide of the goal.

Louis van Gaal pulled off an ineffective Adnan Januzaj in favor of Marouane Fellaini after 72 minutes, and United began to look more of a threat to equalize.

Marcos Rojo’s half-volley from outside the 18 caused some ping-pong danger in the 79th minute, but Fellaini headed just over the bar.

Adrian made a huge save on Robin van Persie in the 83rd minute. Radamel Falcao laid a ball off for Van Persie, who may’ve gave the keeper an advantage by letting the ball roll across to his preferred left-foot.

De Gea and Adrian traded good saves in the waning moments of the match, which finished with Van Persie earning a free kick on the edge of the area. A Jenkinson clearance made its way to Blind, who blasted the ball home.