Under the watchful eyes of Chris Ramsey and Les Ferdinand and the crossing boot of Matty Phillips, Queens Park Rangers picked up its first away win of the season with a 2-0 win at Sunderland.

Leroy Fer and Bobby Zamora scored for QPR, who leapt into 17th with 22 points. The R’s watched Harry Redknapp quit on the day after the January transfer window closed.

Sunderland is just two points ahead of the drop, with 24.

QPR was on the front foot for the first 10 minutes and, after a spell of possession for Sunderland, went up 1-0 in the 17th minute when Fer powered a header past Costel Pantilimon off a strong cross from Matty Phillips.

Fer came close to making it 2-0 when he rang a shot off the pipe. It rolled down the line but never went into the goal and the R’s lead stayed at 1. 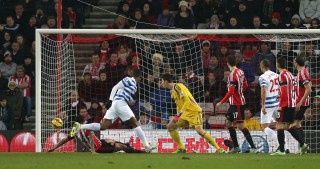 Defoe’s close-range shot was looped over keeper Robert Green near the 30-minute mark, close but no cigar. And Connor Wickham’s arching cross/shot in the 35th minute was kept out by Green, the crossbar, and physics.

Phillips was provider from the right side again, but Zamora stole the show with a one-touch blast near the spot.

Sunderland applied pressure late, and won the possession battle, but didn’t tempt the net all that often in the second half. The Black Cats won a bunch of late corners, but couldn’t find a finish.