Another busy day for the Premier League, as Chelsea, Manchester City and Manchester United all won to make the Top Three rather familiar.

Southampton stumbled, Crystal Palace rallied and West Brom picked up an absolutely massive three points in a midweek day worth of fun.

The Toffees remain in a bit of danger after a match in which they deserved to take a point from Stamford Bridge. Petr Cech was the difference makes for most of the game before Gareth Barry picked up his second yellow card and Willian’s seeing-eye goal made it three points for leaders.

This really happened: Chris Smalling scored a brace in a Premier League match. That said, Louis van Gaal wasn’t pleased with the Red Devils, who picked up a late insurance goal via Angel Di Maria winning a penalty that Robin van Persie converted for the final tally.

Tony Pulis is exhaling after the Baggies got a big day from Brown Ideye to upset Swansea City at the Hawthorns. Swans have dropped off a bit after launching lofty expectations. Surely Garry Monk is wondering what life would be like if he still had Wilfried Bony.

Magpies supporters were thrilled to have a 1-0 lead on their former manager Alan Pardew, and perhaps it was even better for them to know that underused (by Pardew) Papiss Cisse did the trick. But Fraizer Campbell beat Mike Williamson soundly and poked a ball by Tim Krul to earn a grinning Pardew his point. 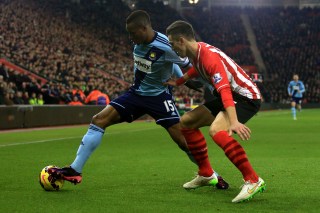 Stoke put a brief scare into City before the visitors roared back to take a decisive win. Sergio Aguero scored a pair, Samir Nasri also scored and James Milner kept up his fine scoring ways. Peter Crouch scored Stoke’s only goal. Newcastle is up next for City, still 7 back of Chelsea.

The Saints stumbled, and fell to fourth in the Premier League. Adrian took a red card with a half-hour to play, but Southampton couldn’t find the goal to keep them in the Top Three.