Record-signing Brown Ideye scored a goal and added an assist as West Bromwich Albion picked up much needed drop zone breathing room with a 2-0 home win over Swansea City on Wednesday.

For Swansea, it’s another step back. They sit in ninth place with 34 points after flirting with a top-end finish earlier this season.

The goal waited for the second half, but really was a strong finish from Ideye. West Brom’s record signing spun with the ball before striking a dart past Swans keeper Fabianski. 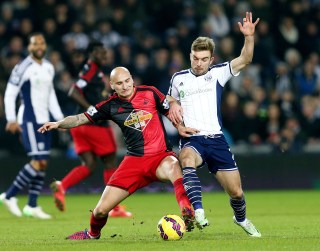 And Ideye turned playmaker about 15 minutes later, sending a ball that Berahino finished with a right-foot shot from the center of the box. Tony Pulis could exhale. His Baggies would take all three points.

It was a very Pulis-like performance for West Brom, who had less than 40 percent possession for much of the match but managed to out attempt Swans.