Five Premier League clubs took the pitch for fifth-round FA Cup matches on Saturday, and only two remain thanks to two all-top-flight matches and a Blackburn upset.

Fraizer Campbell stayed in form by slotting home a punched-out rebound from Simon Mignolet, and Alan Pardew’s Palace looked prepared to knock an English giant out of the FA Cup before the quarterfinals.

And by prepared, we mean allowing Liverpool to possess the heck out of the ball in hopes of holding onto the lead until they could counterattack.

The Reds put on Mario Balotelli at halftime in the hopes he could mirror his midweek heroics against Tottenham. But it was a starter who would equalize, with Daniel Sturridge first-touching Jordan Henderson’s pass through the legs of Palace keeper Julian Speroni in the 49th minute.

But Balotelli worked to win a free kick just outside the box in the 58th minute. He then presided over it with Henderson, hammering it through a hole in the wall caused by his teammates. Speroni couldn’t control the well-hit shot, and Lallana timed his run well to slam home the rebound. It was 2-1 to the visitors. 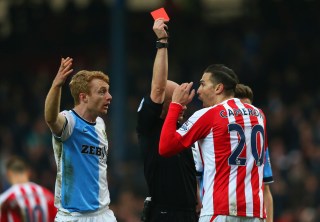 Geoff Cameron conceded a penalty for the second time in a week, and the USMNT midfielder/defender was sent off as the Potters were upset by Joshua King and the Rovers.

King scored a hat trick to lead the way for Blackburn.

The Potters came out firing, with Peter Crouch scoring a goal in the 10th minute. Stoke looked in control, but King had already equalized when Cameron was shown a straight red for grabbing a hold of King in the box.

Rudy Gestede converted the penalty kick, as King scored or set up all four Rovers goals.

The Yak is indeed back for Reading, as Yakubu Aiyegbeni came off the bench to score an 82nd minute winner for the Royals.

Stephen Warnock picked up two yellow cards in a busy first half, giving the Rams a real problem in trying to advance at home.

Scoreless at half, Hal Robson-Kanu netted in the 53rd minute before Darren Bent equalized for Derby less than 10 minutes later.

The Hammers fielded a strong squad, albeit without Andy Carroll, but didn’t look too interested once Brown Ideye started running all over the visitors.

Ideye netted twice, with James Morrison also scored a strong goal from distance and Saido Berahino added a near-post laser to seal the Baggies trip to the quarterfinals.