Shockingly, it’s now been three La Liga games since Cristiano Ronaldo last scored a goal for Real Madrid — and he might even be up for sale — but Los Blancos got back on track with a smooth 2-0 victory over Deportivo on Saturday. Ronaldo did pick up an assists on Karim Benzema’s goal in the 73rd minute, but the game seemed to be well in hand already following what proved to be the winner from Isco in the 22nd minute.

With Barcelona (53 points) and Atletico Madrid (50) still to play this weekend, Real (57) hold a four-point lead in their bid to regain the La Liga title from Madrid’s “other” team.

With Sevilla (45 points) and Valencia (44) locked in a tight battle for La Liga’s fourth and final UEFA Champions League place, the former took a slim lead on Saturday thanks to a comfortable home victory over Cordoba.

Grzegorz Krychowiak scored the game’s opening goal (38th minute) before being sent off (73rd) a little later. Colombian forward Carlos Bacca banged in his 13th league goal of the season a minute before halftime, giving Sevilla a cozy 2-0 lead. Vicente Iborra chipped in with the just-in-case insurance goal (76th), putting all the pressure on Valencia, who play early Sunday morning. 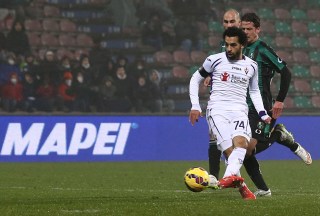 It was an afternoon to forget for Rafa Benitez’s Napoli side — and that’s putting it nicely — who, despite holding 64 percent of possession and out-shooting Palermo eight to seven, were toothless and fell 3-1 to seventh-placed Palermo.

Moroccan midfielder Achraf Lazaar opened the scoring in the 14th minute, Franco Vazquez doubled the lead (36th minute) and Luca Rigoni made it 3-0 (65th) before Manolo Gabbiadini snatched a late consolation goal (82nd). Napoli remain in third, but with results going against them elsewhere, saw their hold on third shrink considerably.

Mohamed Salah (above photo), the player sent the other way in Juan Cuadrado’s move to Chelsea, had himself quite a full debut for Fiorentina on Saturday, scoring a goal and setting up another as the race for Serie A’s third and final Champions League place got extremely interesting.

Salah put Fiorentina ahead with a slotted finish past the ‘keeper in the 30th minute before assisting on Khouma Babacar’s goal two minutes later. Babacar scored again in the 67th minute, assisted by 35-year-old David Pizarro, to push Vincenzo Montella’s side just four points back of Napoli.