A match with no impact on the Premier League table will leave plenty of neutrals thinking there’s no way West Bromwich Albion’s days in the relegation debate will last much longer.

West Ham United fielded a strong side for its FA Cup fifth-round match at the Hawthorns on Saturday. It mattered very little, as West Brom manager Tony Pulis watched as record-signing Brown Ideye made it three-straight matches with a goal in a 4-0 defeat of the Hammers.

Ideye scored a pair of goals, and played the part of a man possessed. He was the force to be reckoned with in the first half as the Baggies built a 2-0 lead, and then made it 3-0 on a powerful header before the match was an hour old.

That goal was the one that will have Pulis and West Brom fans feeling extra good. Ideye couldn’t get to an inviting cross, but quickly doubled back onside, screaming for the ball between the six and the penalty spot. Stephane Sessegnon’s cross found him, and he rose from a standing position to powerfully head home. 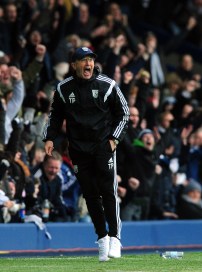 By the time Saido Berahino sent a near-post bullet past Adrian to make it 4-0, West Ham’s Morgan Amalfitano had been sent off for a gross tackle and petulant slap.

It was clear that the Baggies were not only onto the next round, but looking like a club that could challenge for Wembley. With only three traditional powers remaining — Arsenal, Liverpool, Manchester United — the draw could aid Pulis’ cause.

When it comes to the Premier League, the Baggies are four points clear of the drop zone with 13 matches to play. Trips to Sunderland and Aston Villa sandwich a home visit from Southampton, and it’s not unreasonable to think the Baggies will be angling for a mid-table finish by the end of that trio of matches.

Hired on New Year’s Day, Pulis has presided over just a single loss, that coming on Jan. 31 against Spurs. The Baggies have a trio of FA Cup wins to go with a 2W-2D-1L record (not counting Pulis watching the Jan. 1 draw at West Ham from the stands).

West Brom is into FA Cup quarterfinals for the first time since 2008.