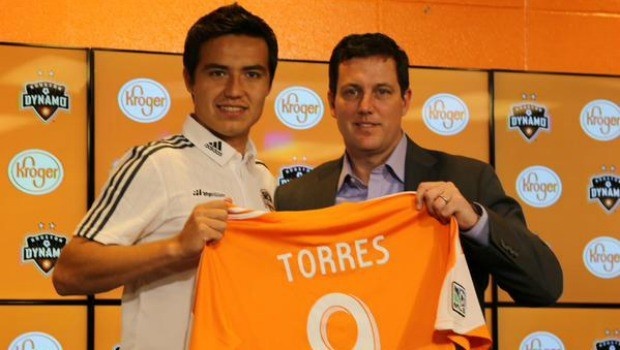 2014 was a heck of year for Erick “Cubo” Torres. The young striker scored his first senior goal for the Mexican national team, starred for Chivas USA during its final year in Major League Soccer and watched an uncertain club future play out before finding a home with the Houston Dynamo.

Now on loan to Chivas Guadalajara, Torres can focus on his game knowing his national coach likes him and his club isn’t going anywhere. Torres, 22, traded some Q&A with PST during a promotional tour celebrating a relationship between his Mexican club’s relationship with Tecate/Tecate Light in the United States.

Torres isn’t headed back to MLS for a little bit still, but the striker has been encouraged not only by the Houston community but the support of Mexico head coach Miguel Herrera for those El Tri players plying their trade in the U.S.

“It’s very meaningful to hear what my mentor and teacher Miguel Herrera has expressed,” said Torres, who netted his first El Tri goal in October versus Panama.

“He has influenced a big deal in my decision to remain in the MLS, now with the Dynamo in Houston, because just like the national Mexican soccer Team, Miguel’s advice has motivated me a lot. The eyes are on the MLS, and my efforts are being looked (at). It’s important that everybody sees the work that is being done in the MLS.”

Torres mentioned DaMarcus Beasley as a player he’s most interested in getting to know, and playing alongside, noting Beasley’s vast experience and time in Mexico. And he mentioned that Dynamo fans’ welcoming thoughts on social media have been a boon to his confidence, and that Houston’s ethnic diversity is a big part of his comfort.

“The Hispanic community in Houston, it’s very important,” he said. “It’s a beautiful city, where I will feel very comfortable, since its so close to my country and where there is a lot of people who will make me feel at home.”

[ RELATED: Do MLS players hold the power in CBA talks? ]

But Torres wasn’t averse to discussing his wild 2014. The striker and his Chivas USA teammates had to watch as fans speculated about the future of the club, Los Angeles “rebrand” badges were bandied about, and the league eventually decided that the Goats would be no more. I asked Torres whether he was relaxed or anxious about the impending changes.

“Honestly, I was very excited for this new change in my life and career, a new type of soccer and new lifestyle overall change,” said Torres, who exploded for 15 goals in 26 matches last season with the Goats.

“I thank God because I’ve had a lot support from a lot of people who helped in this transition process and quickly adapt to the new city and the MLS. I took this challenge with a lot of enthusiasm because I knew it was going to be a good opportunity to move forward in my career.”

He’s also relishing the loan, even knowing Houston could try to trigger its end before May 13.  A lifelong Chivas fan raised in Guadalajara, moving away from his boyhood club hasn’t been easy.

Knowing that Chivas is not entirely safe from Liga MX relegation doesn’t make it less difficult, and finding playing time in a forward corps of Omar Bravo, Aldo de Nigris, and Rafael Marquez Lugo hasn’t been easy work, either. But Torres knows there’s a greater good despite being limited to a pair of substitute appearances for Guadalajara since Jan. 18.

We asked Torres about his goals for the season ahead, with Chivas, Houston and Mexico.

“Now that I’m with Chivas I’d like to close this tournament the best way possible, try to add more goals and minutes as wells as in the near future be able to play with the national soccer team, because there are important events coming such as Copa America and Copa Oro. In either of this two events, there could be an open opportunity for young players, so I¹m definitely working towards that. Also, there is an interesting process with the national team within my category and I am concentrating fully putting my mind in representing my country. After incorporating with my new team in Houston, I hope to adapt as fast as I can to do all the right moves.”

Torres should thrive in Houston, and it’ll be interesting to monitor how Herrera uses “Cubo” this summer. The striker was dynamite to watch in 2014 and should help the Owen Coyle’s Dynamo be a part of the discussion in a loaded Western Conference.

*Many thanks to Tecate’s Gustavo Guerra and Shaun Levy for arranging the discussion with Torres.