A goalkeeper’s goal is overshadowing big wins from a pair of big names at both ends of the table, as the Bundesliga continues to provide plenty of excitement.

Second-place Wolfsburg has yet to play, and USMNT defender John Anthony Brooks will try to keep the red-hot Wolves at bay on Sunday.

The UEFA Champions League side got goals from Ilkay Gundogan, Pierre-Emerick Aubameyang and Marco Reus, while Florian Klein and George Niedermeier scored for the hosts.

In the relegation zone for most of the season, BVB’s third-straight victory has it within a remarkable three points of the top half of the table.

Augsburg 2-2 Bayer Leverkusen
Marwin Hitz is the hero of the day, as the Swiss goalkeeper scored a goal inside the Bayer six-yard box with mere moments to play in stoppage time, giving Augsburg a point and keeping the club in the thick of the race for a UEFA Champions League spot. 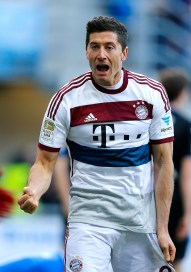 Bayer held 1-0 and 2-1 leads on goals from Josip Drmic and Stefan Reinartz, with Caiuby netting in the middle for Augsburg.

Paderborn 0-6 Bayern Munich
There was a nice time when tiny Bundesliga newcomers Paderborn were shocking the league with early season wins. That time is a distant memory, as Robert Lewandowski scored a brace to leave the hosts a point above the relegation playoff mix.

Bayern gave itself an 11-point table lead before second-place Wolfsburg plays Sunday, also getting a pair of goals from Arjen Robben and individual tallies from Franck Ribery and Mitchell Weiser.