Barcelona’s run of 11 games unbeaten at home (all competitions) came to an end on Saturday as seventh-placed Malaga snatched a famous 1-0 victory at the Camp Nou. Luis Enrique’s Barca remain in second place in La Liga, but the loss opens the door for league leaders Real Madrid to go four points clear as they visit 16th-placed Elche on Sunday.

Spanish forward Juanmi scored the only goal of the game (7th minute) by rounding goalkeeper Claudio Bravo and sliding the ball into an empty net. Despite holding 73 percent of possession, Barca failed to create the requisite number of chances (11 shots, five on goal) to break down Javi Gracia’s resolute Malaga side.

A first half-hour onslaught led by — who else — Mario Mandzukic and Antoine Griezmann saw Diego Simeone’s Atletico easily brush aside 17th-placed Almeria at the Vicente Calderon. Mandzukic (12 league goals) scored from the penalty spot on 13 minutes and Griezmann (14 league goals) added a brace of his own nine minutes apart in the just before the half-hour mark.

The victory keeps Atletico’s hold on third place as firm as ever and moves Los Rojiblancos to within three points of Barca in second. 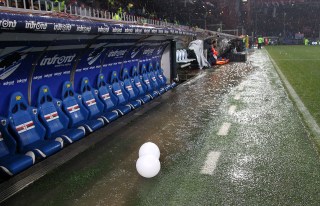 The only Serie A game of the day, Sampdoria vs. Genoa, was postponed due to a waterlogged field (photo at right). A makeup date has not yet been announced, as heavy storms are expected to continue in Genoa on Sunday.