Manchester City won a penalty within 30 seconds of opening kickoff and ran roughshod over Newcastle United, totally outclassing the Magpies in a 5-0 win at the Etihad Stadium on NBC early Saturday afternoon.

City allowed just one shot on target from the Magpies. The big win moved City to within five points of Chelsea and three goals on goal differential. The Citizens are 7 points ahead of third-place Arsenal and eight ahead of Manchester United.

A second-minute penalty made sure the visitors were on the wrong foot. An awful back pass from Mike Williamson put Vurnon Anita in a bad spot, and the Dutchman took down Dzeko in the box.

Aguero doesn’t miss many spot kicks, and he converted this one to make it 1-0 City. 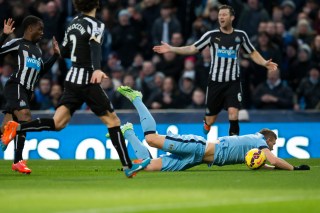 Daryl Janmaat forced Joe Hart to lay out for a left-footed lash that went wide in the 10th minute.

And Nasri added to Newcastle’s misery in the 12th minute, waltzing past Massadio Haidara with his first touch before turning Fabricio Coloccini with a fake shot and beating Tim Krul soundly. 2-0. Ouch.

Then Silva sent a scintillating cross over the head of a jumping Coloccini, and Dzeko didn’t have to do much to beat Krul. 3-0 after 21 minutes… not so good for the Magpies.

Man City poured it on the second half, with Silva netting twice. And Wilfried Bony came on late, making his City debut while his teammates threatened to make it double digits against the deflated and aimless visitors.