Ki Sung-yueng, Jonjo Shelvey and Bafetimbi Gomis combined to help Swansea City sweep Manchester United for the first time in history in a 2-1 win at the Liberty Stadium on Saturday.

The three points will feel like a theft to an in-control United team, but Swans will not be complaining at the result. United drops to fourth, a point behind Arsenal, while Swans sit ninth with 35 points.

Ander Herrera scored United’s lone goal in the 28th minute, but it all fell apart from there.

An early corner found Swansea in a great position, with Bafetimbi Gomis’ strong header cleared off the line by Herrera.

Swans didn’t park the bus, but all tracked back in a hurry when United picked up the ball. On a 16th minute free kick, the area was as congested as you’d like, with all but one Swans player (Gomis) 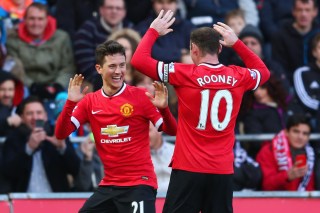 Herrera then opened the scoring by capping off a neat bit of passing in the box.

The lead lasted mere moments, as Jonjo Shelvey sent a pretty cross into the box that Ki cheekily redirected past De Gea. It was 1-1.

And then along came Shelvey.

The enigmatic 22-year-old English midfielder picked up a ball from Ki outside the 18 and smashed a rising ball past De Gea. It took a slight turn off Gomis’ forehead.

Manchester United may’ve had close to 65 percent possession at that point and an 16-8 edge in shot attempts, but the Red Devils trailed by one.