When Rebecca Lowe, Robbie Mustoe, and Robbie Earle are forced to drum on about 18 different penalty decisions following exciting, top-four battles with intricate matchups and fascinating tactical clashes, the game of soccer has devolved into a farcical joke that panders to the lowest common denominator. Truth is, things have been careening towards this inevitable end all season long.

It’s clear to everyone that with a new age of technology has brought about a new age of accountability for officiating, and thus the standard of refereeing has reached the point where one person is no longer capable of doing the job. It’s just not possible. With immediate television replay, hundreds of camera angles, and countless new gadgets of analytical technology, it’s possible to perform open-heart surgery on a referee’s 90-minute performance. But the officials don’t have those tools at their disposal, and to hold them to the same standard is ridiculous.

This Premier League season has been marred by countless decisions that may appear in person to be a difficult decision, but for television viewers who benefit from endless replays and enhanced camera zoom, are clearly incorrect. And yet here we sit, completely ignoring a monstrous problem hoping that things will change so long as we ignore it.

I’m sure you’ve heard the definition of insanity. The elephant in this room has gone insane.

Jose Mourinho may be annoying, but he’s right (to an extent). There’s no “campaign” against Chelsea, they’ve just happened to catch the brunt of what has been a horrific year for refereeing. Don’t listen to Mike Riley, the PGMOL is either delusional, waging a losing PR war, or both. Every weekend it gets worse, with clear decisions proving mind-bogglingly impossible for

The use of technology in the middle of games is out of the question. Nobody wants to stop the flow of a game for officials to look at instant replay. It’s just not feasible, and it’s just not practical.

The answer to our problems is to add referees. The fact that we still ask one lone official to cover an entire soccer pitch is quite frankly ridiculous. Basketball uses three officials to cover a much smaller court. Football uses anywhere from five to eight. Yet in soccer, we’re still stuck with one, plus whatever the linesmen feel like adding, which sometimes isn’t much. Here’s where the linesman was on the potential Simon Mignolet handball today: 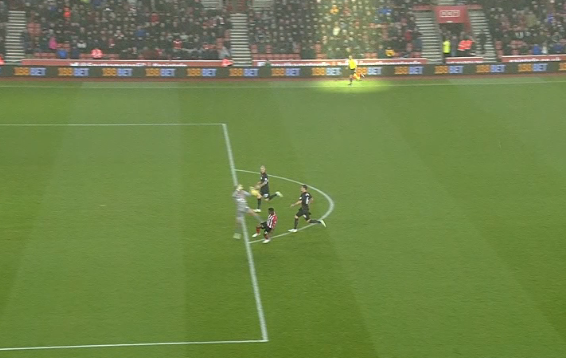 He’s so far behind the play, there’s no good angle to make an accurate call. And people want to tell us extra officials wouldn’t help? How is the linesman that far back? Because he’s trying to concentrate on 800 things at one time.

Look, officiating is an impossible task. Asking humans to be inherently flawless is a losing battle, always has been a losing battle, and always will be a losing battle. So why are we setting the best in the world up to fail, and then publicly humiliating them when they do on a weekly basis? Isn’t this ludicrous? We’ll never get a perfectly officiated game. What we can do is be reasonable.

The Premier League happens to be one of, if not the most visible soccer league in the entire world. English referees are at the top of the game. Martin Atkinson is easily one of the top referees in the entire game, and yet he looked utterly lost this weekend in the process of essentially handing Burnley a point against Chelsea. 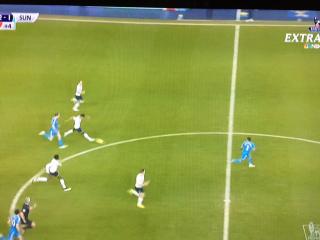 So let’s please help these poor souls out. Sure, there would be a feeling-out period of time which would be weird. It would be awkward. The referees would have to get used to working together rather than working on their own. The players would need to adapt to where they should expect calls to come from. But why are we so opposed to change when it clearly would serve the game better?

Here’s my best attempt at a workable system. If you feel you have a better one, by all means let’s hear it. This is an open forum, a positive discussion to better the game.

Is this really too much to ask? It’s not, and it works. Does adding a pair of referees really cause so much chaos that we still have yet to even make such a proposal? The mere fact that a proposition such as this feels rebellious itself is an issue. Unfortunately, this probably would be met by heavy opposition at the higher levels at first. But why? It only took 140 characters for a smart person to sum it up:

"These referees are incompetent and unable to see the field" "What if we made it so they only had to see 1/2 the field" "HEATHEN. BE GONE"

Officiating is hard. One wrong call can not only change a game completely but also overshadows the other 99 the referee got right. One out of 100 isn’t too bad, right? Wrong, when that call means Nemanja Matic is sent off instead of Ashley Barnes. Would Martin Atkinson have been in better position to see that ghastly tackle had his responsibility in the final thirds been lifted? Would a penalty-area official have seen Joe Allen chop down Filip Djrucic? Probably. Nay, most likely.

Case in point: the Brazilian Serie A uses a system very similar to this, and it works. In a game last year down the stretch, with Palmeiras looking to avoid relegation, they earned a crucial penalty for a clear handball in the box. Despite standing right next to the incident, the referee didn’t give the decision for whatever reason, but with an additional official standing next to a goal post, the penalty was given, and Palmeiras earned a point. Watch at 2:00 in this highlight package:

We will never get a perfect system, and yet we continually expect one. So what’s wrong with getting as close as possible? Officials will always get decisions wrong, but enough is enough. Let’s stop spending week in and week out bashing those brave enough to embark on an officiating career, and instead let’s extend them an olive branch. Everyone wins. Yes, even Chelsea.