Alex Oxlade-Chamberlain pulled one back for the hosts in the first minute of stoppage time, but Yannick Ferreira-Carrasco ended the Gunners’ brief hope.

Monaco leads Arsenal 3-1 after one leg in the Round of 16.

It was a bad day overall for Arsene Wenger’s Gunners, but Olivier Giroud and Per Mertesacker will especially rue their performances.

And Monaco found the opened a minute later, a long rip from Kondogbia which deflects off Per Mertesacker to wrong-foot David Ospina. In fairness, it was probably a deserved lead for the French visitors. 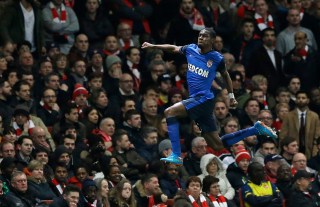 Monaco were late out of the tunnel in the second half, and Arsenal nearly took advantage of a slow start on the pitch. Giroud poked a prime chance wide in the 46th minute.

But guess what? A defensive gaffe from Mertesacker allowed a two on one, and Berbatov all alone on goal isn’t going to miss too often. It was 2-0 less than 10 minutes into the second half.

Arsenal looked certain to answer, but Giroud airmailed an absolute sitter over the Monaco goal in the 57th minute.

Ospina made a great save on Martial in the 61st minute that easily could’ve put this one, and the entire tie, to bed.

Theo Walcott and Danny Welbeck nearly combined to put Arsenal on the board, but Walcott couldn’t beat Subasic, and Welbeck’s rebound shot hit Walcott before bounding over the goal.

Then Oxlade-Chamberlain gave the Gunners a lifeline when he pounced on a headed clearance and curled a shot home, only to watch as Ferreira-Carrasco raced down the pitch off the ensuing kickoff to restore Monaco’s two-goal lead. Yikes.