Had Bayer wasted a prime chance to have a home lead, as Atletico looked unlike themselves? 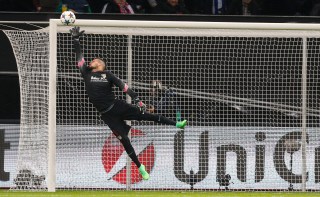 Then Calhanoglu picked up a backheel from Karim Bellarabi and hammered a strike into the goal. After 57 minutes, the hosts were finally up.

Josep Drmic made a cunning dribble in the 74th minute, but couldn’t double Bayer’s lead.

Atletico had appeared to equalize in the 76th minute when a corner kick was flicked onto an unmarked Fernando Torres, but the goal was disallowed on the grounds that the curving corner went out of bounds pre-flick.

Tiago picked up a second yellow card moments later for a wild slide tackle, and was sent off to further damage the La Liga club’s hopes of tying up the match.