Liverpool has done this whole “penalties in Istanbul” thing before, winning the 2005 UEFA Champions League final over AC Milan.

This one had far less fanfare, and the UEFA Europa League bout of PKs vs. Besiktas turned out much worse.

If you asked Brendan Rodgers what his worst case scenario for Thursday’s second leg of Liverpool’s Europa League tie with Besiktas, short of injuries, and he’d likely say something along the lines of “losing in extra time.”

Already smarting from the Premier League scheduling his match against Manchester City for Sunday, Rodgers watched as his weakened side was controlled for most of the second half and beyond. The Turkish giants pushed his club into extra time at 1-1 on aggregate.

And Dejan Lovren, shooting fifth with Raheem Sterling available, missed badly to end Liverpool’s European run in Turkey. The score in regulation was 1-0, and 5-4 in kicks. 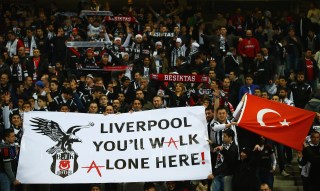 Sixty-first minute sub Tolgay Arslan took just 11 minutes to level things up for Besiktas, taking an assist from Ba, who of course played a big role in the Reds’ memorable loss to Chelsea late last season.

The match could’ve ended in stoppage time, as Demba Ba cranked an in-close shot off the crossbar. And Ba was stopped by Simon Mignolet in the first period of extra time as well.

Liverpool had better luck to start the second 15 minutes of extra time, and the heavy legs of both groups started to make more mistakes. The game slowed to a crawl, though there were some dead ball opportunities.

The Reds entered the match with a 3-0 record in European shootouts. Thursday brought No. 4.