After dwelling in the relegation zone for the majority of the season, a four-match league win streak not only has Borussia Dortmund five points clear of complete safety, but eight points back of the UEFA Champions League.

That’s the headline story from a big weekend in Germany’s Bundesliga, which is making its case among the best top-to-bottom flights in Europe.

Borussia Dortmund 3-0 Schalke
Three goals in eight minutes put the exclamation point on a dominant derby performance, as Jurgen Klopp’s BVB continued its ascent from the bottom of the Bundesliga.

Borussia Dortmund won this edition of the Rivierderby, but needed 78 minutes to find an opener. Pierre-Emerick Aubameyang tapped home a ball before breaking out a bag of costume gear from behind the Schalke goal. Enter Batman Aubameyang and Robin Reus. 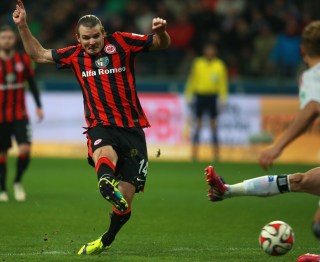 Eintracht Frankfurt 2-1 Hamburger SV
USMNT back Timothy Chandler went 90 minutes and completed the second-most passes (31) in the match as Eintracht pulled into eighth place, ahead of Werder Bremen for at least a day.

Veteran striker Alexander Meier (right) scored his 15th and 16th goals of the season in the win. He’s one shy of Bayern’s Arjen Robben for the Bundesliga lead.