Swans goalkeeper Lukasz Fabianski starred and Burnley scored an own goal as Clarets fell 1-0 to visiting Swansea City on Saturday at Turf Moor.

The three points moved Swansea ahead of West Ham for eight in the Premier League table.

Kieran Trippier put one in his net for Burnley, which is in 18th place, two goals behind QPR in the final drop zone slot.

Fabianski did well to stop Ashley Barnes’ shot in the middle stage of the first half, as the 45 minutes was more notable for aggrieved players than quality chances.

Jonjo Shelvey took a good-looking curler before halftime, but it didn’t come back far enough to threaten the top right corner of the Burnley goal. 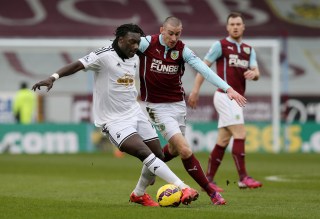 The Clarets won four corners in the first half, but Swansea looked a bit more threatening. Call the first 45 a wash.

But Trippier’s own goal defied Burnley’s typically-workmanlike effort, as Swans went up 1-0 in the 64th minute.

Fabianski made several great saves over the course of the game, not the least of which was a robbery of George Boyd in the late moments of the match.