Second-half subs Charlie Adam and Peter Crouch combined to push Stoke City past visiting Hull, as Mark Hughes pushed the right buttons on the bench for a 1-0 win at the Brittania Stadium.

Crouch headed the ball home in the 71st minute to provide all three points for Stoke, and the Potters are level with West Ham but 10th in the table on goal differential.

‘Twas a half-hour without a shot on target to start the contest.

Stoke was probably the better side once 45 minutes were done and dusted, but there was still little to separate the sides. The Potters took eight more shots than the Tigers’ lone attempt, but only was hit the frame. 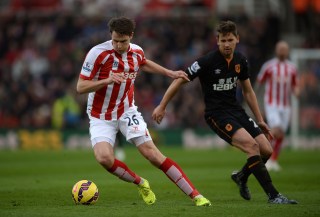 Surely there must be something in the second half.

Crouch then subbed on for the 70th minute and headed an Adam pass past McGregor a minute later for the match’s only goal.

The goal made it four from four matches for the big man, who has been electric whether starting or off the bench.

The Tigers managed just one shot in the match.