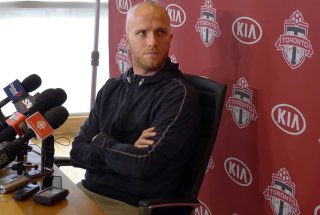 The only Designated Player remaining from last winter’s ‘Bloody Big Deal’ campaign that also saw Jermain Defoe and Gilberto arrive in Ontario, Bradley is the engine for the Reds. We saw a glimpse of what he could do late in the season, but the mid-season World Cup run and subsequent fallout seemed to hamper his play for much of 2014.

Regardless, there’s little question he will be a force in Toronto FC’s expected first playoff run, it’s just whether he’ll toss up a good campaign or a dominant, “M-V-P” chants at BMO Field season. With respect to new teammates Sebastian Giovinco and Jozy Altidore, who are going to put up bonkers offensive performances, it’s the American with the captain’s armband who will need to keep changing the culture at Canada’s biggest club.

When Toronto FC general manager Tim Bezbatchenko unceremoniously ousted Ryan Nelsen with 10 games to go in the club’s failing 2014 campaign, it wasn’t unexpected. The hiring of Vanney, however, was a bit of a surprise. The 40-year-old had no experience in the MLS manager’s seat prior to taking the controls, and couldn’t save the season. TFC actually got worse after letting Nelsen go, going 2W-6L-2T in Vanney’s 10 games (They were 9W-10L-6T last season under Nelsen).

The expectations are even higher this time around. Altidore’s in his prime, Giovinco’s move to MLS is a bit of a head-scratcher in a “How did they convince him?” way, and ex-captain Steven Caldwell will provide experience and leadership as Bradley pulls on the armband. There is absolutely no reason TFC should miss the playoffs this time around. Then again, they shouldn’t have missed last year.

First off, Toronto wants you to know this is going to be different. Even their commercials are willing to take a pop at Defoe:

And it should be different, aside from the passionate TFC fans who continue to fill the stadium. Consider that Defoe walked in, scored 12 goals and found himself 7th on the club’s all-time goals list. By the end of the season, it’s reasonable to think Bradley (currently with 2), Giovinco and Altidore will all be above him on the list.

There are a lot of good pieces around the stars as well. Jonathan Osorio and Justin Morrow are solid, Ashtone Morgan is five appearances away from supplanting Stefan Frei as the all-time club leader, and the club should find goals from Bright Dike and Luke Moore amongst others. TFC also has a good battle at center back, with Nick Hagglund dueling with Polish international Damien Perquis. If Bendik can play reasonably well between the sticks, TFC has the nucleus for a No. 1 seed.

So, yes, this should be the year. But nothing’s ever certain in Toronto.