On Wednesday morning, our own Andy Edwards will tell you a tale of Western Conference dominance. He could probably sleepwalk through the post (though he won’t because he’s got moxie).

That’s because the narrative for Major League Soccer fans — and especially media — over the past few years has been one of Western dominance, and now the conference is gaining two of the best franchises in league history: Sporting KC and the Houston Dynamo.

But hold on a second. What fun is there in following the narrative? Sure the Sounders are the reigning Supporters Shield winners and the Galaxy won yet another MLS Cup, but there’s been a wild influx of new, powerful faces (and teams).

The Reds boast two of the most important U.S. players in Michael Bradley and Jozy Altidore, two players who — for better or for worse — have returned to America from the biggest leagues in the world while still in their prime. And the playoff-free club added an active Italian international in crafty attacker Sebastian Giovinco. Frankly, this is a club which, if successful on the field, will earn and keep the eyes of even the hardiest of Eurosnobs.

The idea of two brand new MLS clubs being able to dart into the league and make the playoffs would seemingly make the opposite point: that the weak East can be in play just by virtue of money. Part of that is true: being able to afford Kaka and David Villa is a pretty big asset for Orlando and New York City, respectively.

But Orlando has built a fervent fan base and championship reputation in Florida, while New York City FC orchestrated an MLS contender with one of the league’s best composers in Jason Kreis. Both clubs did very well in free agency and the expansion draft, and both picked up assets in the SuperDraft. When I was a kid and the San Jose Sharks and Florida Panthers arrived in the NHL, those new shiny teams were cool. The thing about those teams, though, is they were lousy. Neither of these squads will be basement dwellers in the East. 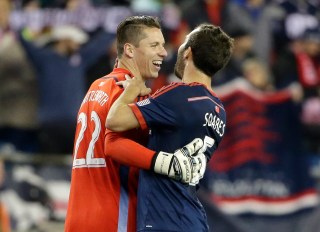 New England boosted Jermaine Jones from Chicago and never looked back, taking the favored Los Angeles Galaxy to the brink in MLS Cup. Now the whole gang is back, and youngsters like Kelyn Rowe, Diego Fagundez and Andrew Farrell are a year older and a year wiser. With a rearguard that includes Jose Goncalves in front of Bobby Shuttleworth (right), and Lee Nguyen working his MVLee magic, New England is fun nearly every week.

This ties into point No. 2, but NYCFC has walked into the Big Apple like it owns the place (Haven’t you heard? Mix “hates the Red Bull”. The new boys have all the momentum, while Red Bulls fans are wondering what the heck is going on after an offseason of upheaval. By the time the first New York Derby gets cooking at Red Bull Arena on May 10, will NYCFC have a bunch of casual New York fans ready for conversion?

There you go, Edwards. Your move.