Liverpool is on cruise control, popping a pair of goals past Burnley and continuing to keep pace with the top of the table in the Premier League with a 2-0 win at Anfield on Wednesday.

Jordan Henderson had a goal and assisted on Daniel Sturridge’s insurance tally to place Liverpool fifth with 51 points on the season.

Burnley’s loss leaves them 19th, in the drop zone with 22 points.

Liverpool nearly scored in the first half-minute off a beautiful bit of combination play that ended with a Heaton save on Sturridge. Shot and a corner before a minute was up? Liverpool were ready.

Then Liverpool hit the scoreboard with a no-doubter from Henderson. Philippe Coutinho’s initial offering was blocked back to Henderson outside the 18, and the former Sunderland man used the outside of his foot to bend a bullet past Heaton. Bent bullets, Matrix stuff. 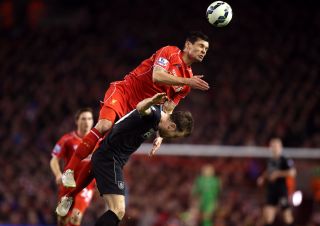 Sturridge made 2-0 just after halftime in making short, clean work of an opportunity from Henderson. And Burnley couldn’t find a way back into the match.

The Reds kept attacking, and did what they needed to do to pick up all three points. Brendan Rodgers’ team looks more and more like the club we saw last season, and the good form is coming just in time for the stretch run.