Manchester United and Newcastle United had two more spits on target than actual goals on Wednesday.

A disgusting incident between Manchester United’s Jonny Evans and Newcastle United’s Papiss Cisse is getting plenty of talk.

After Cisse appeared to respond to Evans kick with a kick out, Evans spat down at Cisse, who leapt up and appeared to spit on Evans’ neck.

While both should be facing suspensions for their actions, social media had a variety of hilarious and terrible justifications. Some seemed to justify Cisse’s reaction as a bit of “eye for an eye”, while several Manchester United honks and pundits tried to write it off as “Evans may’ve been spitting on the ground.”

Here are two takeaways from pundits on English broadcasts:

Pundit No. 1: “It’s not very savoury at all. Evans spits at the floor and I don’t know whether he’s spitting at Cisse or spitting at the floor. But then Cisse spits right at Evans’ neck fom six inches and that’s absolutely disgusting.”

Pundit No. 2: “Jonny Evans is not that kind of guy. What Papiss Cisse did afterwards is unforgivable.”

The managers of the two players, however, were a bit more calculated in their responses. 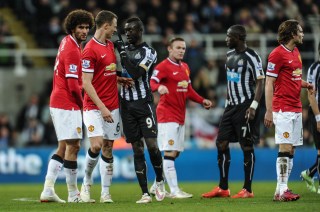 “I didn’t see that from the bench, it was too far away to see a spitting incident so I can’t judge that. I can’t imagine that from Jonny Evans though. He’s a very modest person, I can’t imagine he would do that. I’ve not been made aware of the incident.”

“It’s been brought to my attention, but I’ve not seen it. I just saw a fracas by the half way line. The referee spoke to them both so I need to have a look at it myself. The players haven’t said anything about it to me in the dressing room.You can’t do it (spitting), can you? It’s one of the worst things in football.”

Asked if he would take action if Cisse was found to have overstepped the mark, Carver added: “You can’t do it (spitting), can you? It’s one of the worst things in football.”

The image above makes it pretty darn clear what Cisse was up to, while the video shows Evans spitting down at the prone striker. Although some pundits may want you to believe he was trying to water the grass while the vicious Cisse is the only one doing anything scummy on the play, we know better.