Ki Sung-yueng and Gylfi Sigurdsson netted for Swans, who lost Bafetimbi Gomis in the 12th minute to a very scary incident.

But there was a pall cast over the proceedings when Gomis collapsed with no one around him, and had to be stretchered off the field after convulsing on it. He was responsive before leaving the pitch. 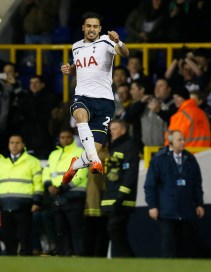 Ki then made it 1-1 when he took Gylfi Sigurdsson’s rebounded free kick from the crossbar and put it behind Hugo Lloris.

Jonjo Shelvey was impactful as usual, with plenty of searching balls and good vision.

Christian Eriksen was the hero of the go-ahead goal for Spurs, working his way through Swans with a dervish of a run before finding Mason. The youngster finished his first Premier League goal, and celebrated like it was a dream come true, which it was.

Spurs doubled their lead on the fast break, with Nabil Bentaleb finding Andros Townsend for a 3-1 lead in the 60th minute.

Jefferson Montero found Sigurdsson for an 89th minute goal, but it was too little, too late for Swansea.