Harry Kane kept up his big time production with a pair of goals to push Spurs within a point of the Top Five and three points of fourth after a 2-0 win at Loftus Road against Queens Park Rangers on Saturday morning.

QPR stays in the drop zone, three points behind No. 17 Aston Villa. The R’s have now lost 11-straight London Derbies in the Premier League.

A late non-call of a handball in the box denied QPR the chance to equalize, but Spurs were the superior team for the majority of the match.

Harry Kane almost made it 1-0 with a header in the sixth minute, turning Kyle Walker’s strong cross from the right across goal for Robert Green to push over the bar.

Spirs looked very dangerous in the opening stanza of the match, thanks in large part to Walker and Townsend’s pace on the right side.

QPR’s best early chance was parried by the usual heroics of Hugo Lloris, with the Spurs captain getting horizontal to paw Charlie Austin’s flick away from goal after a horrific back pass from Walker.

Austin then hammered an equal chance off the crossbar in the 29th minute. The ball pinged down but failed to cross the line, and the danger was eventually cleared. 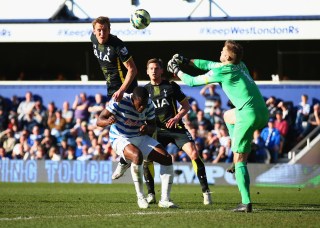 Christian Eriksen sent a curling stunner off the far post just after halftime as Spurs looked to salt away the match early.

QPR’s Bobby Zamora forced Lloris to stop a brute strike in tight that gave the R’s a 58th minute corner, but it didn’t amount to anything.

Kane sunk the dagger in the 69th minute, touching the ball around a diving Green before calmly passing it home with his left foot.

Then struck Sandro with a good-looking side-footed shot from the right side of the 18 with 15 minutes to play, giving the R’s a bit of life.

And Austin thought he had won a PK when Steven Caulker headed a ball down for him moments later. Austin’s shot was blocked by the arm and then face of Nabil Bentaleb, but no call.

Ireland striker Reece Grego-Cox, 19, made his Premier League debut for QPR with an 88th minute substitution.