I’ve been off PST duty since Major League Soccer began its 2015 run on Saturday, and there are a few things that have been rattling around my brain after watching loads of games over the weekend.

From the Citrus Bowl to the Pacific Northwest, my Week 1 thoughts covered a lot of distance.

1) Mix Diskerud was an absolute boss — Look out, USMNT fans, because the man with his first name on his jersey was a threat from Moment No. 1 to his low curling goal that put New York City on top of Orlando City (The Lions came back to draw 1-1).

Diskerud often collected the ball low and basically was a blur in distributing the ball around the pitch. Maybe some of that was magnified by how many other long-haired fellas manned the light blue shirts in Florida, but there were times that Diskerud looked like the MLS version of Eden Hazard. Brilliant stuff.

2) Toronto could be the ‘2014 Liverpool’ of Major League Soccer — To stay with Premier League comparisons, TFC played wide-open ball on Saturday and this Vancouver-hosted track meet could’ve just as easily been 4-4 instead of 3-1 if sitters were made (Looking at you, Octavio Rivero. Good looks on your other goal, though).

Things will tighten up as the season progresses, but there’s plenty of work to be done in defense. The difference between third and first in the Eastern Conference could be whether Joe Bendik is up for the TFC goalkeeping challenge.

3) The usual suspects (mostly) — Who is Keyser Söze? Well, according to advanced stats site Squawka from all of last year and Week One, he might be Seattle defender Chad Marshall.

Granted New England was without Jermaine Jones (sports hernia), but Marshall was dynamite again. I know he’s 30, but it’s shocking to consider that the big Californian hasn’t pulled on the Stars and Stripes since 2010. 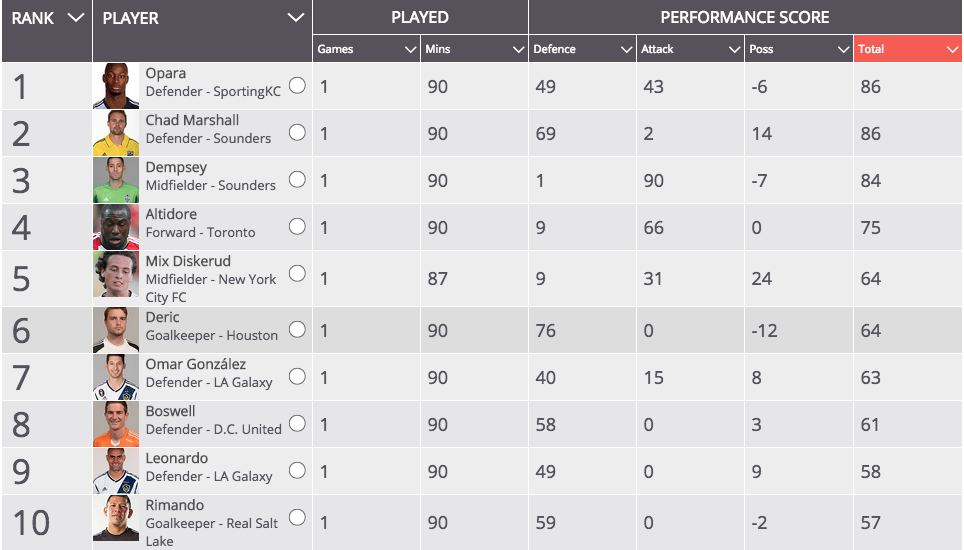