Thomas Muller scored twice and Bayern Munich rolled to the UEFA Champions League quarterfinals with a 7-0 win over 10-man Shakhtar Donetsk at the Allianz Arena on Wednesday.

The first leg finished 0-0 in Ukraine, but hopes of a seismic upset were dashed by an early red card.

A third-minute penalty call featured a red card for Oleksandr Kucher, who took down Mario Gotze in the box. We’re unsure about the red, but a yellow and PK for sure.

Thomas Muller calmly curled his PK past the keeper to give the hosts a 1-0 edge. 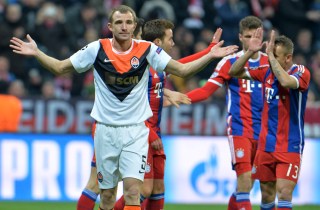 Muller then beat his man and chipped a pass over the diving Pyatov that was oh-so-close to meeting Arjen Robben’s back-post run. No dice.

Lewandowski had a very threatening header ping off the afar post in the 24th minute, and it seemed only a matter of time before the floodgates would open, Germany v. Brazil style.

Pyatov kept several attacks at bay, including a stop through traffic on Franck Ribery.

Boateng made sure it was all but certain in the 33rd minute when he tapped in a Lewandowski rebound in tight.

This is a stat:

Schweinsteiger has completed 56 of his 57 passes against #Shakhtar http://t.co/xPAEMBGCCX pic.twitter.com/K9nc50nx1A

Ribery made it 3-0 just after halftime, working a 1-2 with Boateng before hitting a low ball past Pyatov. And Muller added a second 90 seconds later. Badstuber added a header off Pyatov’s left mitt in the 63rd minute, and Lewandowski got in on the scoring in the 75th with a breakaway goal.