George Boyd scored with a half hour to play to lift Burnley past visiting Manchester City on Saturday.

City and Burnley drew 2-2 at the Etihad earlier this year, and who would’ve thought the recently-promoted Clarets would take points in both matches against the Premier League giants?

That means Burnley has 25 points this season, with four against City. A late penalty cry for Pablo Zabaleta went unheard.

The Clarets are a point back of Sunderland for 17th place, and three behind 16th place Aston Villa. City is five points back of Chelsea and has played two more games than the league leaders.

Burnley started the game with stingy confidence, knowing they had held Manchester City at the Etihad Stadium earlier this season. Chances didn’t present themselves for the Clarets, either, aside from a wild Danny Ings try that didn’t test Joe Hart.

Aguero worked his way into a shot in the 30th minute after Heaton denied Jesus Navas, but the keeper collected his bouncing shot. Moments later, Hart had to get low to stop Scott Arfield. It remained 0-0 through a non-descript half. 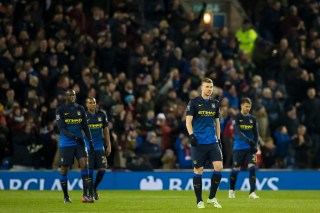 There wasn’t much to the second half, either. Sean Dyche’s Clarets play an extremely disciplined brand of football that can be hard to break down if a team isn’t in sync. Not can City claim it was firing on all cylinders.

Then came pesky Boyd, who first-touch hammered a Vincent Kompany clearance past a diving Hart and neatly inside the right post. Burnley 1, Manchester City 0.

Wilfried Bony subbed on For City, replacing Edin Dzeko, and had a tough header collected by Heaton in the 71st minute.

City built up well and stayed in the Burnley end, but couldn’t find the finishing touch in the 81st minute, as Aguero headed over despite a great cross from Yaya Toure.

City couldn’t find its way through, despite stoppage time cries for a penalty when Zabaleta was taken out in the box by a sliding challenge from Ben Mee. It was a razor-thin call, but one you’ll hear about in the aftermath of this match.