Two goals for Lionel Messi and one of the most unbelievable dribbles you’ll ever see — basically it was another ordinary day for the diminutive Argentine as Barcelona grew their La Liga lead to four points over Real Madrid, who play Sunday.

Messi’s first came from the penalty spot, while his second was a tidy, close-range finish after Ivan Rakitic slipped a through ball behind the Eibar defense and put Messi one-on-one with the ‘keeper. It’s been a good run for Barca, who have won nine out of 10 league games. Up next, it’s El Clasico versus Real Madrid, next Sunday at the Camp Nou.

[ WATCH: Messi with one of the most mesmerizing dribbles you’ll ever see ]

Following a reported falling-out between manager Diego Simeone and Mario Mandzukic, the Croatian forward was conspicuously absent from the gameday roster, and Los Rojiblancos were toothless in his absence. With Fernando Torres starting in Mandzukic’s place, Atleti held just 51 percent of possession and managed just six shots on target against La Liga’s 9th-placed side, Espanyol.

Simeone’s men now find themselves outside the top three, as Valencia are now a point ahead in third, and a nine-point gap to make up in their bid to defend last season’s La Liga title. 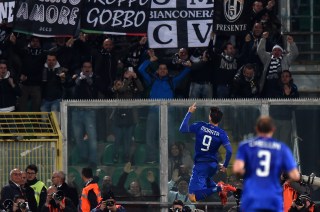 Alvaro Morata (right) was the hero of the day as the former Real Madrid striker scored the game’s only goal, a fantastic curling effort from just outside the penalty area in the 70th minute.

Had Juve dropped two points — or even three — it wouldn’t have been a big deal, as they now hold a 14-point lead atop the Serie A standings. A fourth-straight league title is now a foregone conclusion.