A late dismissal could neither liven nor open up a points-share between Leicester City and Hull City at King Power Stadium on Saturday.

Tom Huddlestone saw a second yellow card late in the goings, but the Foxes only managed three total attempts on Allan McGregor’s goal on the day.

Leicester remains dead last with 19 points, seven points adrift of safety, while Hull is in a three-way tie for 14th with 28 points.

Nikica Jelavic missed a sitter for the ages when Schwarzer was caught out of position early, but his sliding tap-in turned into a hilarious gaffe and the match stayed 0-0. 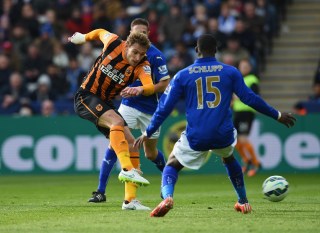 Mark Schwarzer collided midair with Dame N’Doye to collect a cross, and Jelavic put the fumbled ball in the goal, but a foul was called on N’Doye and the match stayed 0-0 in the 28th minute.

There had been as many yellow cards as shots on target by the 70th minute for Hull (4), but Leicester didn’t have great guns, either. The Foxes posted just a single shot on Allan McGregor by that moment in the match.

Tom Huddlestone made it five yellows, and two for himself, when he was sent off in the 71st minute. Leicester couldn’t take advantage of the 10-man Foxes.