Tim Sherwood’s uprising continues, as Aston Villa went on the road and thumped a listless Sunderland side by a 4-0 margin on Saturday at the Stadium of Light.

Christian Benteke and Gabriel Agbonlahor each scored twice as Villa eclipsed the two-goal marker for the first time this Premier League season, moving six points clear of the drop zone.

Sunderland drops to 17th, four points clear of relegation, but that won’t sate the Black Cats supporters who left the stadium in droves during the first half. A select and ornery few even charged the dugout.

Villa struck first, as Leandro Bacuna tore down the right wing before passing low to the center of the box. Benteke let the ball come across to his left foot, and his low shot deflected off a defender’s leg and past Costel Pantilimon to make it 1-0 in the 17th minute. 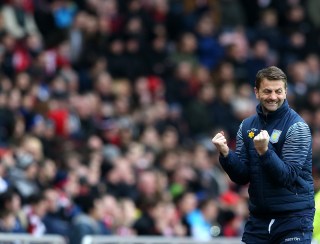 Agbonlahor made it 2-0 to the visitors when he raced onto a long ball that was ghosted by John O’Shea, and chipped a sliding Pantilimon in the 18th.

Sincair hit a side-footed sitter over the bar after another dangerous Bacuna run, and it remained 2-0 in the 30th minute.

Sunderland felt they had won a PK when Jermain Defoe’s first touch bounded off Clark’s arm but no call came from the referee, and Villa made it 3-0 moments later when Agbonlahor put a left-footed past Pantilimon.

Hundreds poured out of the Stadium of Light after the 37th minute goal, and some screaming, gesticulating fans even had to be held back from the Sunderland dugout.

Sunderland fans on the verge of rioting. But even if they all invaded the pitch Aston Villa would probably score three more.

At least three Sunderland fans try to storm the dugout and are held back by stewards, who are now guarding the area.

Bacuna served up another beauty for Benteke to head home in the 44th minute, and droves more fans left the building.

Sebastian Larsson curled a free kick around the outside of the Villa wall in the 69th minute, but the well-positioned unit meant the ball slid wide of the frame.

Steven Fletcher beat Brad Guzan but was denied by the goalpost in the 81st minute.