Last season’s runners-up needed a win to advance in the UEFA Champions League, and Atletico Madrid’s 1-0 advantage after 90 minutes forced extra time with visiting Bayer Leverkusen at the Vicente Calderon on Tuesday.

There was tension, but not a lot of opportunity between the two sides (especially once Mario Suarez evened the score 1-1 on aggregate). penalty kicks changed that.

Atletico moved to 1-3 in UCL PK shootouts, while Bayer falls to 1-1. They can thank Turkish defender Omer Toprak, who had the goal deflect off him and then missed this side’s third PK attempt of the shootout.

Six of eight UCL quarterfinal berths are decided, with Atletico Madrid, Real Madrid, Paris Saint-Germain, AS Monaco, Porto and Bayern Munich all through.

Borussia Dortmund vs.Juventus and Barcelona vs. Manchester City round out the Round of 16 on Wednesday. 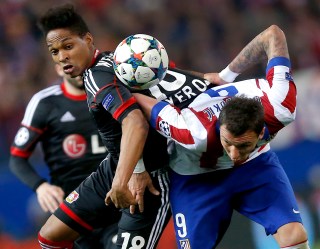 Atletico hit its first obstacle in the 23rd minute, as an injury forced veteran goalkeeper Miguel Angel Moya off for 22-year-old Slovakian backstop Jan Oblak. The backup would prove more than able in a match that came down to kicks.

Mario Suarez returned the match to even footing with Atletico’s first shot on target of the night, a clearance off a free kick play that deflected off the foot of Toprak. It was 1-0 on the night, and 1-1 overall.

Leverkusen spent the majority of the first half hemmed in their own end. When they did counter, Oblak was aided by his quick defense, particularly Joao Miranda.

The second half found two sides playing quite different. Bayer sat back and counted on their team defense and keeper Bernd Leno, while Atlei looked happy to press for the goal that would end it.

Despite the addition of Fernando Torres to the fold in the 81st minute, the match went to extra time, where Stefan Kiessling’s cheeky shot through a defender’s legs bounded wide of the goal. 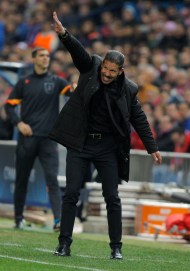 A tense 15 minutes of extra time gave way to the break, leaving the clubs another 15 minutes away from the cruelty of a shootout. Leno made a two-handed stop on an in-tight shot from Arda Turan shortly after play resumed in extra time.

Raul Garcia airmailed the first PK, and Atletico was instantly in a hole. But only for a time, as Calhanoglu hit a weak ball down the middle that Oblak stopped easily. It was one of the worst PKs you’ll see.

Antoine Griezmann suffered no such problem, scoring before Rolfes equalized to make it 1-1 after two sets of shooters. Mario Suarez scored a borderline unstoppable goal before Toprak put a poor attempt over the bar. But Leno dove low and right to thwart a good shot from Koke. Wow!

Castro scored on Bayer’s next attempt to level things at two going into the fifth takers. Torres sent a beauty into the goal, and Oblak was on the clock to deal with Kiessling, who sent it over the bar.