Just two slots remain in the UEFA Champions League quarterfinals after Monaco and Atletico Madrid made sure France and Spain were twice represented in the next round.

One match featured a tense PK shootout while the other never got to extra time thanks to an incredible final-moments save from a Croatian goalkeeper.

The Gunners are going to be rightly hailed for their spirit in Tuesday’s near comeback, but there’s a bigger question to haunt Arsenal supporters: “What if our club didn’t take Monaco lightly in leg No. 1?”

Olivier Giroud and Mesut Ozil both keyed a strong Arsenal attack, with the Frenchman and Aaron Ramsey providing goals in what could’ve been a storied comeback had they found one more. Danijel Subasic made a simply marvelous save on Giroud late, with the ball as close to crossing the goal line as possible before being slapped away.

And the Premier League’s last hope in Europe this season is City overcoming a 2-1 deficit to Barcelona. 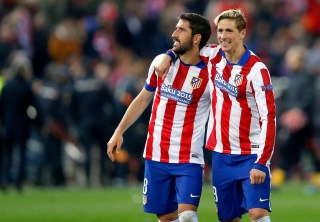 That backfired, and maybe Atletico’s aggression at trying to find the match-winner translated to their confidence in the shootout despite a pair of misses. Fernando Torres got the winner as his Spanish career is going a bit better than his recent stints in Italy and England.

And the Bundesliga’s hopes for a pair of German teams in the quarters rest with Borussia Dortmund after Bayer’s penalty kicks went nowhere near the plan. Airmailed kicks joined an awful flubbed shot down the middle, and Atlei needed conversions from just three players to win it.