Barcelona and Juventus are in the driver’s seat for each of their UEFA Champions League Round of 16 ties, with 2-1 leads heading into second legs on Wednesday.

Whether they’ll be able to hold off charges from Manchester City and Borussia Dortmund to join the other six teams to clinch berths in the quarters is another story.

AS Monaco and Atletico Madrid found homes in the quarters on Tuesday, joining Real Madrid, Bayern Munich, FC Porto and Paris Saint-Germain. Let’s dig into the fortunes of the four teams dueling on Wednesday.

On Wednesday we learn whether Joe Hart’s rejection of a Lionel Messi penalty attempt late in the first leg is a real difference maker. Barcelona leads 2-1 after the leg in Manchester, and 3-1 is a much taller task (as we saw in Arsenal’s second leg with Monaco).

Manchester City will also be the last hope for the Premier League in this season’s competition, a fact that could serve to empower the club or keep it tentative. City can’t afford the latter, and the English side will be facing an in-form Barca side that’s looking better each week and is now atop La Liga… but has an El Clasico looming this Sunday. 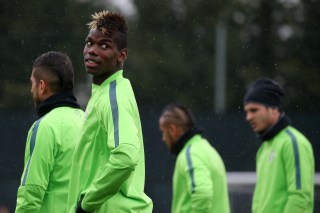 Alvaro Morata was the star of the show in the first leg, and Juventus has a comfortable 14-lead in Serie A while BVB is still fighting for its Bundesliga life. Can the Germans use their away goal to advantage and pull off a 1-0 win (or better)?

A draw won’t do the trick, and once Carlos Tevez, Paul Pogba (right) and dangerous Juve starts scoring it could become an unmanageable track meet for the hosts.

Will Germany’s top flight have two teams in the quarterfinals, or will Bayern Munich be left holding the torch?