In a surprising, curious and even head-scratching development, United States women’s national team legend Abby Wambach is taking off the entire National Women’s Soccer League season from her hometown Western New York Flash in order to prepare for the 2015 World Cup in Canada.

Citing a need to focus for the tournament, Wambach is leaves her club — and even her league — in the lurch. It is not believed that the 34-year-old striker has any major injuries, and the season-long announcement will only serve to pour fuel on the rumors of a post-World Cup retirement.

The No. 2 ranked USWNT has four friendlies before the World Cup begins in June, and Wambach could be in the starting lineup, though it’s more likely she could be a pivotal, late-game substitute.

Wambach is still an impact player in the NWSL, and a focal point for the Flash, making the timing quite terrible for a team that would count on her experience to help guide four first-round draft picks and set an early season pace for when she leaves for the tournament.

Had they known, you’d have to think the Flash would’ve used her and some of their draft picks as a valuable chip in bringing fire power to the club for this summer. Would they have traded stars Carli Lloyd and Sam Kerr if they knew Wambach would be skipping the season?

“I am so proud of our league and truly appreciate the support of the Sahlens and the fans of Western New York,” Wambach said. “At this stage of my career, I know what I need to prepare mentally and physically for this summer. My sole focus is to help bring a World Cup back to the U.S.” 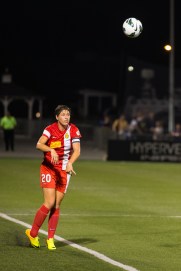 As a member of the Western New York Flash, Wambach, 34, appeared in 29 matches and registered 17 goals and seven assists in two seasons with the club. She helped the Flash capture the inaugural NWSL Shield as the team with the best overall regular season record and led them to the 2013 NWSL championship game against the Portland Thorns FC before falling 2-0 at Sahlen’s Stadium.

“While it’s difficult to lose a player like Abby, we are grateful for her contributions over the past two years, not only to the Flash but to the entire Rochester and Western New York soccer community,” Flash President Alex Sahlen said. “We want to wish Abby and the rest of the U.S. Women’s National Team the best of luck in the upcoming World Cup.”

Clearly the club knew about her departure before the announcement, but Wambach’s decision to sit out the entire season puts the Flash in a horrible spot. It seems an awful lot like a prelude to a retirement, with the World Cup serving as a swan song. Wambach struggled through injuries to make just 10 appearances last season, scoring 6 goals with 4 assists, and plies her trade far from her home in the Pacific Northwest.

The Flash are in training camp now, and open the regular season in Seattle on April 12. Assuming a deep run in the World Cup — the final is July 5 — the Flash would still have 10 games in the regular season once the tournament is over. But the announcement means Wambach won’t even be making a token appearance on her hometown pitch in Western New York.

WNY fans and teammates have often lauded Wambach as the ultimate team-first player, but the timing of this announcement seems to fly in the face of such sentiments.