Barcelona’s pairing of Neymar and Lionel Messi is looking strong at the right time, as the Blaugranas advanced past Manchester City with a 1-0 win on Wednesday at the Camp Nou.

Messi set up Ivan Rakitic for a first half goal and Barcelona toyed with its Premier League opposition for most of the night.

If not for Joe Hart’s performance between the sticks for City, and some substandard finishing attempts from Barca, it could’ve been an ugly score line. It wasn’t quite Tim Howard vs. Belgium in the World Cup, but it was close.

Sergio Aguero won a 78th minute penalty on an awful dive, and Marc-andre ter Stegen stopped him cold to preserve the clean sheet.

Manchester City was missing any semblance of threat and made it up for it by fouling the heck out of Barca.

Neymar came close to making it 3-1 on aggregate in the sixth minute, picking up a sly touch from Dani Alves and side-footing an in-close shot that bounded off the inside of the left post and glided down the goal line. 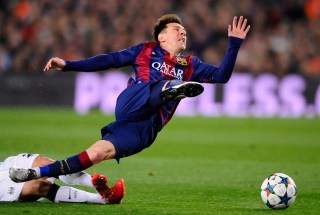 And Barca continued to pour it on in search of the match’s first goal, finding it through Rakitic. Lionel Messi picked out Rakitic with a dime of a left-footed cross from close to 40 yards away, and the Croatian chipped Joe Hart to make it 1-0 (3-1).

Man City came out of the gate fouling, sacrificing several free kicks that Messi was unable to finish (sometimes by the slimmest of margins). Barca was thriving, and City looked listless. There were three nutmegs in the first half. Three. Two by Messi and one by Neymar.

Luis Suarez had a bit of a snake-bit performance, missing the finishing edge that could’ve buried City well before the second-half was half over. He chipped a ball off the crossbar from six yards out in the 86th minute.

City had several chances during a 64th minute scrum in the Barca box, but that only serve to spring a counter for Neymar that ended with Messi being stopped by a sliding Hart.

Neymar had a 73rd minute goal ruled offside. If it was, it was by the slimmest of margins.