Juventus got two goals and an assist from Carlos Tevez and Borussia Dortmund rarely threatened the Italian side’s goal in a 3-0 win at the Westfalenstadion on Wednesday, sending The Old Lady to the UEFA Champions League quarterfinals 5-1 on aggregate.

Alvaro Morata scored an insurance goal off a break in the 71st minute, as Juventus will be the only Italian representative in the quarters. Tevez finished off the scoring in the 79th minute.

Dortmund trailed 2-1 after the first leg in Turin, but couldn’t use home field to its advantage to reclaim a spot in the final eight.

It took just over two minutes for Tevez to change the complexion of the tie, as he stopped a pass dead and lashed a 25-yard bullet into the upper 90. Now the home side would need two goals and no concessions to advance to the quarterfinals. 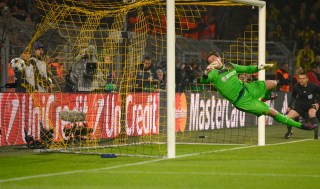 Juve nearly put it to bed just after halftime when Tevez weaved a dazzling dribble into the BVB half before slipping a through ball to Alvaro Morata, only to see the 22-year-old Spaniard denied by an onrushing Roman Weidenfeller.

And the Dortmund keeper was again called-upon to stop Morata on another partial break minutes later, with Weidenfeller kicking the shot away with his right leg.