Bafetimbi Gomis’ late goal denied Aston Villa a critical point in its fight for Premier League safety, as Swansea City picked up a 1-0 win at Villa Park on Saturday.

Villa remains three points above the drop, in 16th place, while Swansea moves into 8th place.

Villa came out of the gate hard, but didn’t quite have its finishing edge.

Then the visitors found their footing, and Guzan was forced into a pair of quick saves on the half-hour. When he couldn’t make the save, his teammates helped out. Clark made a goal line stop of Bafetimbi Gomis in the 36th minute as Swans found effective pressure.

And Guzan also contributed in entertaining ways, including a bizarre decision not to catch a back pass in the 42nd minute. Instead, he made a weak one-touch clearance off Gomis that the Frenchman couldn’t convert into a goal. 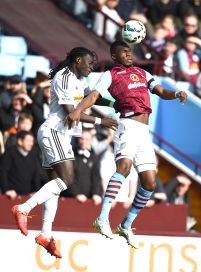 Gabriel Agbonlahor had a point blank shot deflected out for a corner in the 57th minute, but Villa couldn’t convert the ensuing corner kick and it remained scoreless.

Swansea held possession for much of the second half, but neither team provided consistent threats of any kind well into the final half-hour.

Then came Gomis, who slid to direct a Jefferson Montero pass by Guzan.