Wilfried Bony, David Silva and Fernando scored first-half goals to lead Manchester City through a comfortable and dominant 2-0 win over West Bromwich Albion at the Etihad Stadium on Saturday.

West Brom didn’t have a shot attempt until a 72nd minute corner, and it was a beauty. Saido Berahino turned a header off the bottom of the bar. At that point, shot attempts were 39-1 and possession was 80-20.

City is three points back of Chelsea and has played two more matches, while West Brom remains in 13th, eight points clear of the drop zone.

The wrong man was sent off after 2 minutes, though it’s hard to imagine West Brom holding off Manchester City for 88-plus minutes regardless of the bizarre sending-off early at the Etihad Stadium.

After an errant back pass, Craig Dawson took down Wilfried Bony on a break early in the match. Referee Neil Swarbrick opted to send off Gareth McAuley instead. It caused much consternation amongst, well, everyone.

To be fair to Swarbrick, Dawson did not seem to make much of an attempt to lay claim to the red. 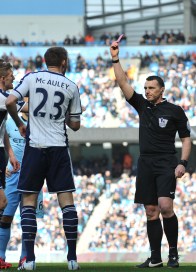 Bony broke down the Baggies resolve after 27 minutes, picking up a partially-blocked Vincent Kompany attempt and moving himself into position to fire into the goal.

And Fernando doubled the advantage as the clock struck 40. Eliaquim Mangala launched into a corner kick with a very high and uncalled touch, and Jonas Olsson mis-touched a clearance back toward his keeper, Boaz Myhill, who could only palm the ball into the path of the City midfielder.

The second half continued to be all City, as Myhill was the only thing standing between an obliterated scoreboard. Sergio Aguero alone was denied several goals by the American-born Welsh goalkeeper.

Silva deflected Stevan Jovetic’s shot past Myhill in the 77th minute to put an end to whatever drama might’ve been manufactured by an odd Baggies chance.