It was your classic “tale of two halves”, as Arsenal controlled the first 45 only for the hosts to dominate the second. Moussa Sissoko was the only player to beat Ospina, though, and the Gunners picked up all three points.

Arsenal kept pace with victorious Man City for third in the Premier League, while Newcastle sinks to 12th, 10 points clear of the drop zone.

Newcastle and its makeshift defense were out of sorts early and often, and Tim Krul continued to look shaky between the sticks.

Arsenal netted in the 25th minute when Giroud was the second Gunner to redirect Santi Cazorla’s free kick.

And Giroud made it 2-0 in the 28th minute when he headed a Cazorla cross past Krul. Arsenal was surging and Newcastle was looking like a club with little to play for, an especially dangerous condition given a critical Tyne-Wear Derby on deck. 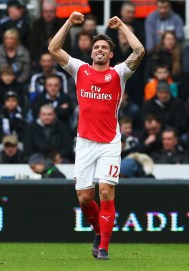 Newcastle pulled a goal back just after halftime, as Sissoko raced into the 18 to meet a cross from Remy Cabella. He sent it past a wrong-footed Ospina, and then Ayoze Perez nearly tied it with a lofted ball soon after, and had another shot deflected wide moments later.

Yoan Gouffran made a slow, low mess of a 61st minute opportunity for Newcastle. The Magpies continued to pour forward, winning corners and free kicks without deploying the finishing touch to square things up.

With Coquelin off with an injury, Newcastle then had a man-advantage for several minutes, with Daryl Janmaat hammered a distant shot wide of the goal.

The Magpies were dominant in the second half, but David Ospina was brilliant between the sticks for Arsenal. Newcastle couldn’t convert a 16-7 edge in shot attempts into an equalizer, let alone a winner.